Visualisation of the North Sea Energy Island. Please note that the scope, appearance and exact features of the island have not yet been determined (©Danish Energy Agency).

Following a political agreement, the construction of the North Sea Energy Island – one of the largest projects in Danish history – now enters into a new phase. The tender material and competitive dialogue kicks off next Spring.

A political agreement between a broad majority of the Danish Parliament 3rd October sets the direction for the coming tender for the North Sea energy island.

The tender procedure will be competitive dialogue allowing the tender material to be developed and finalized in cooperation with the prequalified bidders. The tender will predominantly be based on functional requirements providing flexibility in design optimization to the private sector.

“We look forward to entering the next phase of the project and to working with the many great visionary companies and people within the green energy market. Through a competitive dialogue as part of the tendering process it is our hope and ambition to establish a strong foundation for the North Sea energy island. Investing in more green energy is no longer an option but a must,” says Mogens Hagelskær, Deputy Director in The Danish Energy Agency with responsibility for the energy islands in Denmark.

To ensure full market awareness of the upcoming tender, the Danish Energy Agency and its financial advisors will carry out a marketing campaign targeted at potential investors. The campaign will be executed over the next months and be based on public available information to ensure competition, transparency and a level playing field for all bidders.

The tender will be published following a political decision based on the progress of international agreements on interconnectors, the specific financing model for the energy system and updated profitability calculations.

Tendering procedure preparation sub-agreement II on tendering for the Energy Island in the North Sea.

Energy island in the North Sea 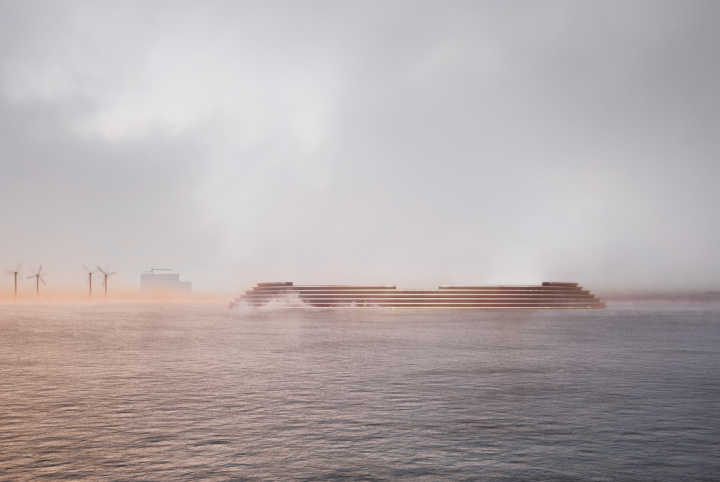 Visualisation of the North Sea Energy Island. Please note that the scope, appearance and exact features of the island have not yet been determined (©Danish Energy Agency).
Download