Biogas is a renewable energy that can replace natural gas. It is produced by anaerobic digestion of organic material. Manure, sewage sludge and other organic waste types from industries and households are suitable feedstocks. Biogas production is thus a combined energy production and a waste treatment technology. When manure is used for biogas production, the emission of greenhouse gasses from handling and storage of slurry is reduced. A by-product from biogas production is high quality natural fertilizer. 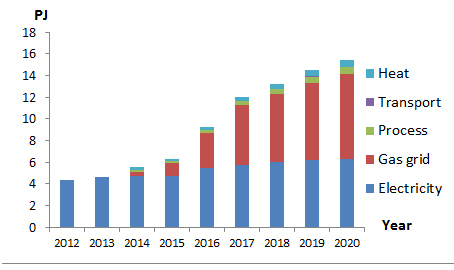 Historical and expected future biogas production and its use in Denmark 2012-2020.

Maps of biogas plants in Denmark

Map of biogas plants in operation and under establishment

Map of bioplant production per municipality

Biogas is promoted through public subsidies

Biogas is promoted through public subsidies according to its use. The different support schemes for biogas include the following uses:

Biogas used for transport cannot receive subsidy as a transport fuel if food crops (corn, maize, sugar beets and Jerusalem artichokes) have been used in the production of biogas.