Green growth refers to economic growth that uses resources in a sustainable manner. This is done by production and exchange of green or environmental goods and services. In the following the definition used by Statistics Denmark applies. Statistics Denmark compiles the Danish contribution to the Environmental Goods and Services Sector Accounts in Eurostat.  Environmental products are goods and services that are produced for the purpose of preventing, reducing and eliminating pollution and any other degradation of the environment and preserving and maintaining the stock of natural resources and hence safeguarding against.

Research and development within the field is also included.

Environmental awareness has increased over the last decades. This has increased the interest for production of green goods and services, both nationally and internationally. Sales and exports of green solutions to the global market are the main drivers of the green growth in Denmark. The increased focus on green growth and green transition worldwide increases demand for Danish technology and knowhow.

Investment in the green transition is important not only due to climate challenges, but also to ensure security of supply and enable the Danish economy to become independent of unstable energy prices and scarce resources. It also supports and improves the competitiveness of Danish businesses in the global market for green solutions.

The market for green technology is expected to grow in the future as more countries prioritise a green agenda.

The green transition is an opportunity for Denmark to strengthen the domestic market for green energy and climate solutions as much as an opportunity to demonstrate green solutions on a large scale. This increases the possibilities for Danish businesses to export to the growing global market.

The possibilities to test and demonstrate new green technology also attract foreign companies, who see an opportunity for testing their products in an advanced energy system with a high level/share of renewable energy.]

Green production in Denmark contributes significantly to the Danish economy. In 2014 Denmark produced green goods and services worth a total value of DKK 174 billion. Exports of green goods and services accounted for DKK 72 billion, which equivalents to 7 pct. of total Danish exports. 59.000 people are employed full time within the green sector, corresponding to 2.7 pct. of total employment in 2014.

Environmental products are goods and services that are produced for the purpose of preventing, reducing and eliminating pollution and any other degradation of the environment and preserving and maintaining the stock of natural resources and hence safeguarding against depletion1.

Statistics Denmark publish the statistics Green Goods and Services yearly (Grønne varer og tjenester), the most recent with data for 2014. The statistics is produced in order to monitor, on at statistical basis, the development in the green production and businesses in Denmark across time and determine its significance in the Danish economy and the numbers are used as common reference point when discussing green growth in Denmark.

According to the statistics, Denmark produced green goods and services worth of 174 billion Danish kroner (DKK) in 2014. This is an increase of 9 billion (5.5 pct.) compared to 2013. Just under half of this production (86.1 billion DKK) was related to renewable energy while the turnover of products that increase energy efficiency was 24.3 billion DKK. 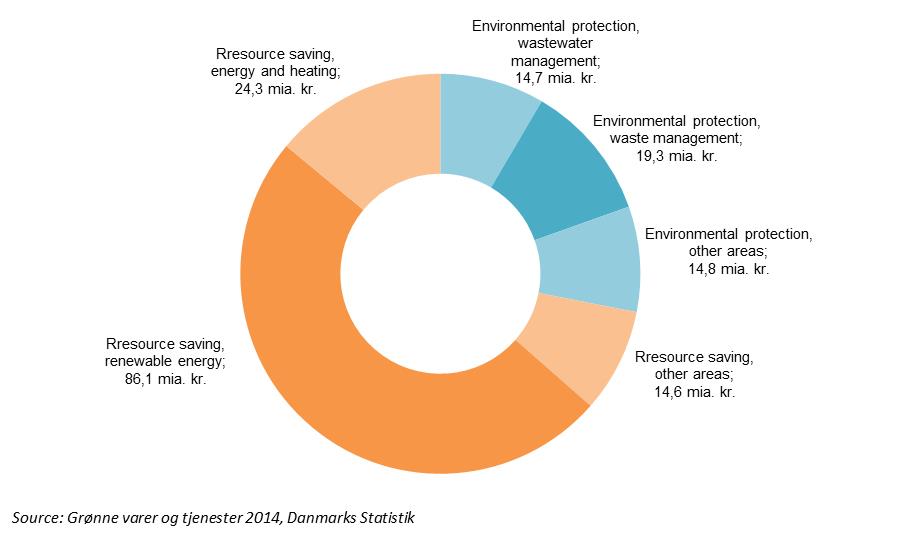 The statistics can be found here at Statistics Denmark - StatBank

Many years of active Danish policy on energy and climate has created possibilities for development of new export products based on green technology. 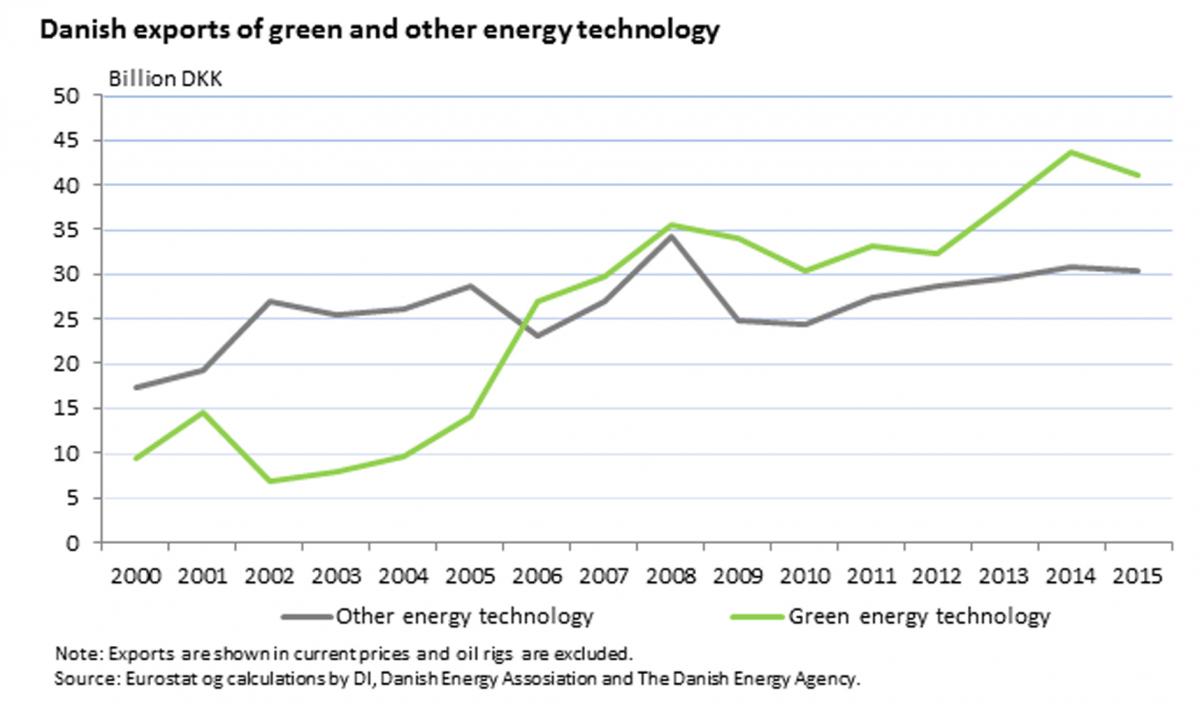 The main points from the analysis are:

The figures can be found in graphs and tables in the Danish publication Energiteknologieksport analysen for 2015.