Licences for oil and gas

The State grants licences and participates with a 20 pct. share

The Danish subsoil contains a spectrum of resources, including oil and gas. The Minister for Climate, Energy and Utilities grants licenses for the exploration and production of oil and gas in Denmark. A licence grants one or more companies the right to explore for and produce hydrocarbons in a defined area.

Licences can be awarded according to two different procedures, either by the “mini round” procedure or as a neighbouring block to an existing license.

At a mini round, interested companies can apply for a licence in an area, without prior invitation. An announcement of the application will be published in Statstidende and The Official Journal of the European Union. Other interested parties can then send in their application within 90 days.

If there are geological or production-related reasons for it, a licensee can apply for a licence in an adjacent area (a neighboring block)

By the amendment of the Subsoil Act of 1 May 2019, the Danish Government closed for oil and gas exploration on land and in inner Danish waters.

A broad majority in the Danish Parliament reached in the North Sea agreement from 3 December 2020, a deal on the future of fossil extraction in the North Sea, which lead to the decision that all future licensing rounds to extract oil and gas are cancelled. New exploration will only happen through already existing opportunities like mini rounds and neighboring block procedures, so that the state will no longer invite to exploration of fossil fuels. It was further decided, that new licenses only could be awarded in the area west of 6° 15' eastern longitude, and that a 2050 end date for all existing and future licences for oil and gas recovery would be introduced. The changes were implemented by the amendment of the Subsoil Act of 14 December 2021. 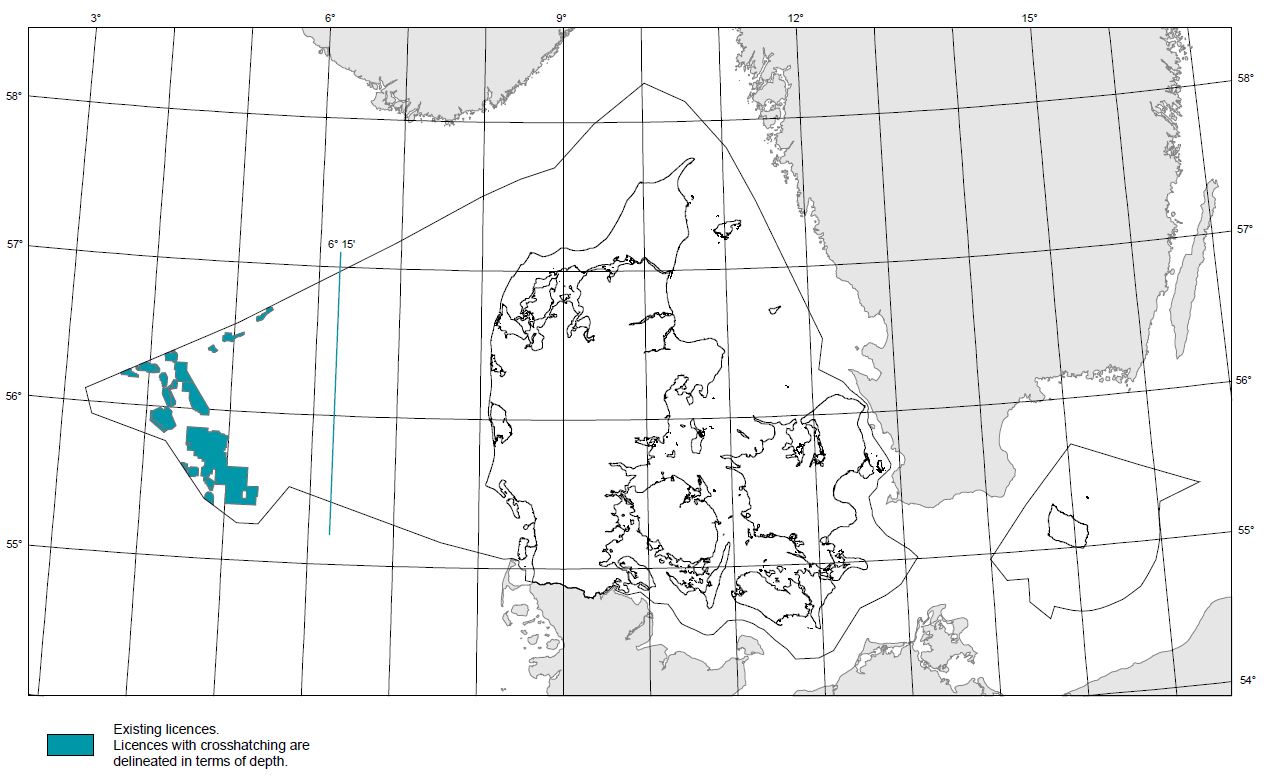 Activities comprised by a licence

Generally, exploration is carried out for a term of six years under a new licence. During this period, the companies are to carry out the agreed work programmes, e.g. performing seismic surveys and drilling exploration wells.

The exploration term may be extended for two years at a time, but generally may not exceed ten years in total. An accumulation is declared commercial if sufficient volumes of oil and gas are discovered. If the companies decide to proceed with development activities, they have a right to a licence for the production of oil and gas for a period of up to 30 years, with the limitation of the 2050 end date for all existing and future licences for oil and gas recovery in Denmark, following the North Sea Agreement of 3 December 2020.

Licence map – the whole of Denmark

The use of Danish subsoil resources is regulated by the Danish Subsoil Act, among other rules and regulations.