Bornholm Energy Island is a pioneering project within the green transition and an important initiative in the fight against the climate crisis.

The Danish Parliament has decided that from 2030 Bornholm will be the collection point for 3 GW of green power from offshore wind turbines, which will be placed in the Baltic Sea approx. 15 kilometers from Bornholm coast. On the island, the current is transformed into direct current, which can be transported over long distances in sea and land cables – initially to Zealand and Germany.

The onshore substation will be located approximately one kilometer south of Nylars, Lodbæk and Aakirkeby and can supply green energy, corresponding to the electricity consumption of 3.3 million Danish households. This will more than double Denmark’s current installed offshore wind power capacity.

The tender for the offshore wind farms is undertaken by The Danish Energy Agency, while Energinet is responsible for the tendering process and establishment of onshore facilities and transmission cables.

Bornholm Energy Island will be one of the largest construction projects in the history of Denmark, and marks a new era for production of offshore wind power on an unprecedented scale.

Green power is a crucial part of the solution to the climate crisis and a prerequisite for achieving the political goal of reducing Denmark's greenhouse gas emissions by 70 per cent compared to the level in 1990.

Read more about the Climate agreement for energy and industry, etc., of 22 June 2020

At the Baltic Sea Energy Security Summit, Denmark and Germany also entered into an agreement to establish an underwater cable between the two countries. This enables the offshore wind power to be sent directly from the energy island to the German electricity grid and on to the rest of Europe. The political agreement with Germany is a major step towards stronger energy cooperation in the Baltic Sea.

The energy island in the Baltic Sea

Bornholm Energy Island will pave the way for the establishment of future energy islands, initially in the North Sea. Just like the North Sea Energy Island, the ambition is that power from the offshore wind farms can be converted into other forms of energy, for example Power-to-X. However, the establishment of Power-to-X must be done on the private initiative of the concession winner of the offshore wind tender for Energiø Bornholm. 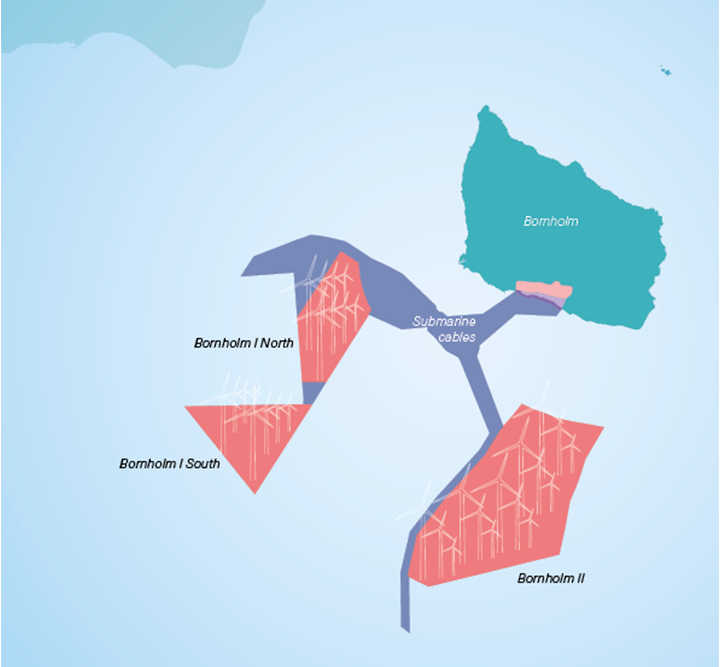 Read and view more about the location of the wind turbines off the coast of Bornholm (in Danish).

The Danish Energy Agency, which has the overall responsible authority that owns the energy island project and is responsible for the supply of offshore wind. The project is being carried out with a number of important partners, including Energinet and Bornholm's Regional Municipality.

Energinet is responsible for the electrical installations and cables, which will tie power from the offshore wind turbines together with the Danish power grid and send power to Germany. Read more about Energinet's work in relation to the energy islands.

Energinet is responsible for establishing the electrical installations and cables, which will connect the energy from the offshore wind turbines to the Danish power grid and send electricity to Germany. Read more about Energinet's work with the energy islands.

Bornholm's Regional Municipality and the Danish Energy Agency work closely together on tasks regarding public hearings and citizen involvement, as well as communication of the Bornholm Energy Island project in general.

Next step in the project

The work surrounding the energy islands is comprehensive and complex, and there are many processes to complete and decisions to make in parallel. There are therefore many steps that still need to be taken in the project. Below you can get an overview of the most central steps:

The Danish Energy Agency has enlisted a number of consultants to contribute reports that in various ways relate to the placement of the energy islands and their surrounding offshore wind farms.

You will find the reports below. They include a fine screening of the optimum sites for the energy islands and associated offshore wind farms in the North Sea and the Baltic Sea, a geological expert assessment for the location of the energy island in a relatively shallow area in the North Sea, as well as visualizations of offshore wind farms in the Baltic Sea. Please note that the documentation is mostly written in Danish:

​As part of the political decision to establish the energy islands, Energinet, has been instructed to commence preliminary studies of selected areas on Bornholm and in the Baltic Sea. At the same time, the areas are reserved for the establishment of energy islands and government development of offshore wind. The preliminary studies are the first step towards the realization of the energy islands and include geophysical (for example sonar studies, where you screen the seabed) and geotechnical studies (for example drilling into the seabed) as well as environmental studies (for example the impact on the area's wildlife) and metocean investigations.

On 30 November 2020, Energinet is instructed to carry out preliminary studies for the energy islands

On 13 October 2021, Energinet received a general revised order to carry out preliminary studies for Energiø Bornholm

On 22 June 2021, Energinet received permission to start preliminary studies in the Baltic Sea

On 21 December 2021, Energinet received permission to carry out additional preliminary studies in the Baltic Sea

14 March 2022: Decision on changing the figure on soft-start in preliminary studies for Bornholm Energy Island